Well, well, well. Just in time for World Autism Awareness Day, there is a very highly publicized new stat about autism. This number will be used and referred to many times on April 2, 2014. It will be etched in stone and be forever called the “autism rate” or “rate of autism.”

The media coverage of the new prevalence numbers from the US Centers for Disease Control (CDC) has been nothing short of disappointing and shallow.

Then again, none of us should be reading about science or medicine via press release and that is what most media coverage of science and medicine is.

Except they aren’t. Here’s the first sentence from the press release from the CDC on http://www.cdc.gov: “The Centers for Disease Control and Prevention (CDC) estimates that 1 in 68 children (or 14.7 per 1,000 eight-year-olds) in multiple communities in the United States has been identified with autism spectrum disorder (ASD).”

The report looks at the number of 8 year old children diagnosed with autism,  pervasive developmental disorder–not otherwise specified (pdd-nos) and Aspergers in 2010 in 11 states. To look at it another way, children who were born in 2002 who had been diagnosed. 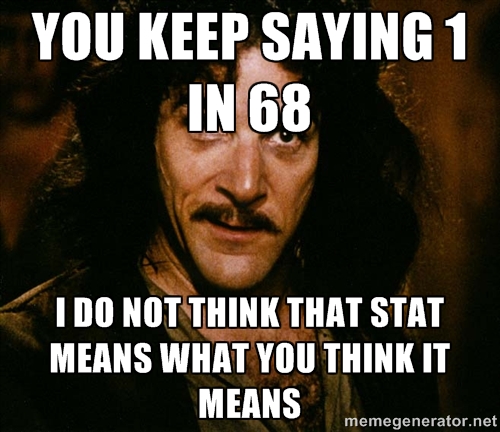 For Canadians, parroting the CDC number is a bigger problem than it is for Americans.

There are 3 big reasons why Canadians, and just about anybody else, cannot rely on this new prevalence number to say how many children or adults have been diagnosed on the autism spectrum.

1.  The research isn’t intended to be applied across a national population.

While the CDC  says 1 in 68, the article contains an important qualifier about the stat:

“Because the ADDM Network sites do not provide a representative sample of the entire United States, the combined prevalence estimates presented in this report cannot be generalized to all children aged 8 years in the United States population.”

In other words, the report doesn’t cover the entire population because it is not a “representative sample.” This report covers 11 states (Alabama, Arizona, Arkansas, Colorado, Georgia, Maryland, Missouri, New Jersey, North Carolina, Utah, and Wisconsin), which is 3 less than the last report. When the Autism and Developmental Disabilities Monitoring (ADDM) Network began, 14 states were originally selected.

The states that were chosen for the study were selected, according to the CDC in the Methods section of the report, “through a competitive objective review process on the basis of their ability to conduct active, records-based surveillance of ASD; they were not selected to be a nationally representative sample.”

Each state has an institution where the data collection is conducted. Some represent a small area of the state, as in the case of Utah where the University of Utah has a surveillance area of 3 counties.

2.  There is a great variation between states in who has been diagnosed. It is even tougher to compare countries.

The 1 in 68 doesn’t apply in all of the states where the data was collected. The prevalence of autism in New Jersey is estimated to be 4 times greater than in Alabama.

The prevalence from a region in one nation varies greatly from numbers in the latest CDC report. In 2011, it was reported that 1 in 38 children in the South Korean city of Goyang were autistic. This quickly became the “rate” for all of South Korea.

Health Canada’s website on autism states that international studies indicate that about one in every 150-160 children “have autism.”

3.  Which brings us to the biggest reason why Canadians should not be using 1 in 68–we just don’t know what the prevalence is in Canada.

Canada has no national program to do a similar study. Even with the limitations of the CDC report, no national body exists to do that same kind of research because health is a provincial matter. The Public Health Agency of Canada might be the right federal agency to pull together the investigation, but it has few of the resources and a very different mandate.

On World Autism Awareness Day, let’s spare a moment to reflect on why Canada doesn’t know what the prevalence of autism is in our country.

Then, let’s reflect on what not knowing the number for Canada–or using another country’s problematic number–really means for us. In the end, it means we don’t have a clue about what we need to do to support Canadians on the spectrum or their families. 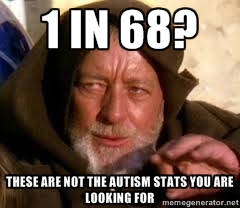 Note: I don’t own either of the images I used here, but I created both using memegenerator. I do own both movies, though. I prefer The Empire Strikes Back to the original Star Wars/A New Hope.